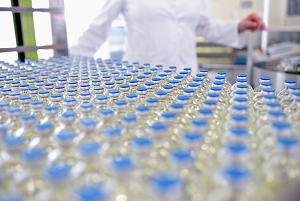 AMIDST all the talk of impeachment, there was
a hint recently of a crack in the national political divide.
Even House Speaker Nancy Pelosi acknowledged that
Democrats and Republicans were talking to one another
about the soaring drug prices, although the president
says it is a smokescreen for the Democrats’ real agenda:
impeachment.
For the pharmaceutical industry, these have been trying
times, as they seem to go from one crisis to the next. It is as
if America has suddenly woken up to the outrageous profits
that the industry records and the fact that Americans
are among the highest payers for pharmaceuticals in the
world.
For years, the drug industry more or less fixed prices as
they saw fit. There was no rhyme or reason as to why certain
essential drugs were as much as 75% higher than they
were in some of our neighboring countries or in Europe.
Suddenly, the industry has come under the microscope
and a number of states have begun to regulate prices.
Just as sudden was the development of a new national
opioid crisis and mounting litigation. There was some
comfort in the industry with Obamacare, but it too has
come under increased attack from the current administration
and from Republicans in Congress. Even Democrats
now admit that change is inevitable.
At some point there will be a push in Congress to regulate
drug prices. There are even calls to force the dispensing
of labeled drugs as opposed to the increased popularity
of the cheaper generic drugs. Big drug companies suddenly
find themselves in a highly competitive market as generic drug companies surface.

Even Amazon is creating waves about entering
the health care market. By 2014, 85% of
all prescription drug purchases were generic
drugs. Amazon is supposedly negotiating with
such companies as Novartis and Mylan, which
could further push generics over the leading
label drug manufacturers.
You could say that the drug companies are
becoming increasingly desperate. Witness the
giant Allergan drug company, which negotiated
with the Mohawk tribe to take over all IP rights
for one of its most profitable drugs. Washington
nowadays is full of drug company lobbyists who
are preparing for the worst: Congressional regulation
of prices. What is at stake is their ageold
free ride as far as profits are concerned.
The drug industry was further shaken by the
bankruptcy of Purdue Pharma, which is part of
a deal to settle thousands of lawsuits alleging
that the company misled doctors and the public
as it promoted its opioid painkillers, including
its blockbuster OxyContin, and helped to ignite
the opioid epidemic. The bankruptcy filing
should freeze the lawsuits against the drugmaker
and likely result in the claims being shifted
into bankruptcy court, according to legal
experts. Such a process is meant to ensure that a company that declares bankruptcy can preserve its value while it gets more time
to negotiate with every entity to which
it owes money. It’s also meant to ensure
that all those creditors will somehow be
denied their claims.
Now the Wall Street Journal reports
that Endo International plc, Johnson &
Johnson and other drugmakers that face
the same litigation over the opioid crisis
are exploring a way to settle their cases
by participating in Purdue Pharma LP’s
bankruptcy. Five drug makers battling
the cases — Endo, J&J, Teva Pharmaceutical
Industries Ltd, Allergan plc and
Mallinckrodt plc — are looking to enact
a global settlement of the litigation that
would be implemented through Purdue’s
Chapter 11 case. The mechanism,
if successful, would allow the companies
to contribute money into a trust set up
through the bankruptcy in exchange for
a complete release from liability, according
to the report.
But if the drug companies appear
to be under siege now, more is certainly
coming. According to The New York Times, “the administration and leading
members of Congress have also been discussing
legislative proposals, including
negotiating directly with companies to
set price caps on some drugs, and placing
a limit on out-of-pocket spending
by Medicare beneficiaries. These government
efforts pack a broad populist
appeal, particularly with older Americans,
who remain one of the nation’s
most reliable voting blocs.”
The country’s new fledgling obsession
with socialism has taken a page from the
drug crisis, arguing for national health
insurance and the like. But the truth is
that many socialist models of “health
care for all” have failed miserably, with
some of the most chronic diseases either
going untreated or undertreated. Shortages
of medicine are not uncommon, and
remarkably it has always been the U.S.
that has come to the rescue, supplying
essential drugs.
Perhaps the pharma industry was too
greedy making higher margins than any
other industry. In hearings before Congress,
the pharma spokesmen argued that the high costs of research and development
were eating away at much of the profits. But after
everything is said and done, they admitted that profit
margins exceeded 20%. If you read between the lines,
drug companies are really trying to figure out a way
to return to the days when they were not under much
scrutiny and the world was able to “fargin” them their
profits. It seemed that when it comes to health, people
are ready to forgive the greed as opposed to any other
industry.
But the return to “normal” is no longer on the horizon
for the pharma industry. The cost of drugs and
the huge profits recorded by the industry are likely
to become a key campaign issue in 2020. There is no
longer the prospect of sugarcoating an industry that
has largely taken America for a ride. In 2016, the U.S.
spent 17.8% of its gross domestic product (GDP) on
health care, while the average health-care spending
in other relatively high-income countries was 11.5%
of GDP. The average American family spends 10.1% of
income just on health insurance premiums —almost
$11,000 per person.
It was inevitable that the country would one day
look to the drug companies to bring some kind of balance
to the American overspending on health care,
particularly drugs. Now with the opioid crisis, that
day has come more rapidly, with a day of reckoning
not far behind.